WHAT IS PLASTIC POLLUTION?

You may have seen and listened to a lot of people talking about plastic pollution. Some people deny the problems caused by use of plastic just like they deny global warming. Ignorance is the biggest threat to our world. Some people are in a delusion that they know everything and the information they possess is always correct. There is nothing wrong in a disagreement but some people mind using their brains. These people must be educated at all cost or we and our mother nature will continue to suffer. Now let’s get to our topic.

WHAT IS PLASTIC POLLUTION?

Plastic pollution is the accumulation of plastic objects and particles (e.g. plastic bottles, bags and micro-beads) in the Earth’s environment that affects wildlife adversely”

WHAT ARE THE DANGERS OF PLASTIC POLLUTION?

It is estimated that from 1.1 million to 8.8 million tonnes of plastic waste enters the ocean from coastal communities each year. Plastic is extremely harmful to organisms or aquamarine life in water. Fish and other creatures that live in the sea can die due to plastic ingestion. It also causes flooding in low lying areas due to clogging of the drainage system. Micro plastics have been found in more than 100 aquatic species, including fish, shrimp, and mussels destined for our dinner plates. ‘’Plastic have also been found to have blocked digestive tracts or pierced organs, causing death.’’

fifteenth Pakistan with 1.5%, sixteenth Brazil with 1.5%, seventeenth Myanmar with 1.4%, eighteenth Morocco with 1.0%, nineteenth North Korea with 1.0%, twentieth United States with 0.9%. The rest of the world’s countries combined wind up the 16.9% of the mismanaged plastic waste in the oceans, according to a study published by Science, Jambeck et al (2015).

Of the 5800 million tonnes of primary plastic no longer in use, only 9 percent has been recycled since 1950. Incineration of plastic increases global warming which worsens the condition of mother nature by melting glaciers and increasing sea levels which results in floods. 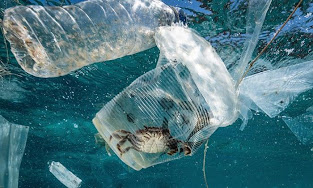 WHAT CAN WE DO TO SAVE OUR ENVIRONMENT?

Now all of us can see that we are all surrounded by plastic pollution. The use of plastic has become so common and it plays a very important role in our life. We carry food items and other things like groceries in plastic bags, majority of people celebrate national day in their respective countries while using small plastic flags and while they are feeling patriotic celebrating national day, they are also causing harm to mother nature. Use of plastic must be discouraged at every level and place at all cost.

Plastic Shopping bags can be replaced with shopping bags made from cloth. Carrying food in at low cost, bio-degradable and non-plastic boxes should be encouraged. Biodegradable bottles should be used for drinks. Computers, cell phones and other devices manufacturing companies should also stop using plastic.

I know this change will be difficult but if we want to see our future generations living without being surrounded by billions of tonnes of trash and plastic waste then we must stand together and eliminate the use of plastic from our world as soon as possible.

WHAT IS BULLYING? | ITS KINDS & CAUSES | HOW TO DEAL WITH BULLIES?