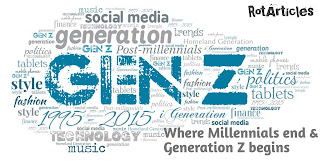 Do you feel more comfortable talking in texts than face to face? Or do you prefer Cool over hot now? Or does eBooks have made library your ex?

If Yes, then you are the fresher in the adulthood university. Though millennial’s are still to graduate and the most talked about, the Gen-Z are making their mark. But what makes Gen – Z different from previous generations?
Apart from the fact that the person should be born after 1995, Gen Z is now the new shoulders holding the responsibility to shape the world. While many people believe that the Gen-Z are better in understanding and are respectful towards others morals than the millennial’s some consider them too lazy to  revolt against. A generation of day dreamers  and night hooter, Gen z seems to challenge rules every minute.

A generation that prefers Skills over Education seems too dangerous to the education business. A much more tolerance for other religion have caused political issues. Religious Institution have lower their cut-off for Gen-Z , who doesn’t seems too pleased to stand in a queue. However, we can’t say that this generation is totally atheist because they do believe in God, the main difference comes in the way they are comfortable with other religions which was absent in earlier generations .

Gen-Z  in many ways is more open to everything from same sex marriages to female dominance. The favorite word of their dictionary is “Influencers”. This generation believes themselves as influencers and are not awkward in their responsibilities. They feel a sense of responsibility in doing things they love. The GenZers  are in  search of truth about everything happening and works on facts and accept themselves more comfortably then millennials.

Accepting individuals is what the most positive aspect found in Gen-Z but too Young for love and hate,  maintaining relationship balance is some of their weak points. Gen-Z has tried to regain connection with the nature and has felt the pain of wildlife. With a clear vision of saving nature and natural life they have set out their mission in different sectors. This Generation  is not like the millennial or Me-Generation, along with focusing on themselves they too focus on issues related to society and nature.

Gen-Z gives a rare combination of both fake and realistic acceptance. A rather confused generation, tries to figure out its own way in style and believes in importance of dialogue and accepting different opinions to solve a problem. With just few years in action there is a lot more to be explored about Generation Z which is growing on a fast pace. A solid looking fresher’s are ready to make impact on the world soon enough and hopefully bring positive changes in the world.

What is Homeschooling and how it works in India?

Man Should also Have a the Me Too Movement